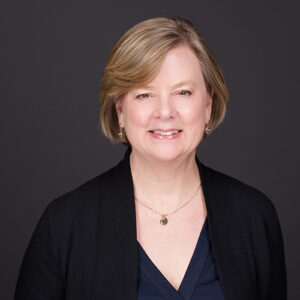 Fitzpatrick Lentz & Bubba attorney Jane P. Long was honored as the outgoing Board Chair at the 2021 Lehigh Valley Economic Development Corporation’s (LVEDC) annual meeting. Ms. Long has served on the LVEDC Board for more than a decade and just completed her second term as Board Chair, only the second person to have done that in LVEDC’s history.

“To me, Jane is LVEDC,” said Don Cunningham, President & CEO of LVEDC, during the virtual meeting held on March 16, 2021. “Jane’s a true professional, a gifted leader, a special person, and a rare combination of brains and heart and character that make her someone extraordinary.”

During the broadcast, Ms. Long reflected on her last year as Board Chair. “You may be familiar with Winston Churchill’s saying, ‘Never waste a crisis.’ I’d like to think that describes how the Lehigh Valley has reacted,” she stated. “Even in these difficult times, the resilience of the Lehigh Valley economy shines through. Companies pivoted to address massive changes head on. Economic development was not halted by the pandemic. Business interest in the Lehigh Valley continues, and LVEDC continues its work to attract talent and encourage conditions in which businesses may come here, start here and flourish here.”

In 2019, it was announced that Ms. Long would be stepping back from the daily practice of law, after being Chair of the FLB’s Corporate, Business & Banking practice for 16 years. As of April 1, 2021, Ms. Long will be fully retired from the practice of law.

“Jane has been a phenomenal leader and mentor over the last two decades,” said Joseph A. Bubba, Co-Managing Shareholder of FLB. “We are thankful for her stewardship and excellence over the years. We wish her well in her retirement.”