Fitzpatrick Lentz & Bubba, P.C. (FLB) is pleased to announce that the Firm is celebrating 30 years of serving businesses and individual clients in the Mid-Atlantic Region with quality, responsive legal services. Consistently recognized as a top law firm in the greater Lehigh Valley region, FLB is also one of the largest firms in Pennsylvania, according to the PA Law 100.

History of the Firm

FLB’s successful history is based on helping people and businesses thrive. Thirty years ago, just as the Lehigh Valley was emerging as a nationally-acknowledged, integrated metropolitan region,  Joseph A. Fitzpatrick, Jr., Joseph A. Bubba and Edward J. Lentz, who had practiced together previously at another firm, united to build a firm that would have a lasting impact on the area’s growth and economic strength. 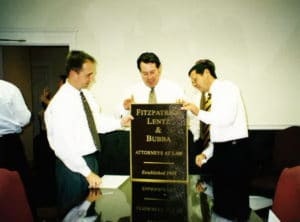 “Since the beginning, we’ve emphasized a culture of integrity with a dedicated understanding of the law. We began with a promise to focus on our clients, and that still continues,” said Joseph A. Fitzpatrick, Jr., Founder and Shareholder of Fitzpatrick Lentz & Bubba, P.C.  “Our sole focus in starting the Firm was to provide an emerging regional client base with the individual attention needed to solve sophisticated legal challenges.”

In the early days of FLB, the Firm concentrated on land use and real estate, corporate law, healthcare, taxation and estate planning.  In keeping with the times as well as the expected growth of the region, the Firm enhanced its services by adding niche, but critical legal services, such as mergers & acquisitions, employment law and intellectual property & patent law.

“Along with the region, we’ve really evolved since 1988,” says Mr. Fitzpatrick.  “We are proud that we helped shaped the Lehigh Valley into the flourishing region it is today,” says Joe Bubba, Co-Managing Shareholder of Fitzpatrick Lentz & Bubba. “But for every visible, high-profile project we’ve been involved in, we also helped hundreds of small businesses, families and nonprofits build, grow and thrive.”

Watch our 30th Anniversary Video and look back on the history of the Firm.

Over the years, FLB received many recognitions for its excellence and integrity. Some notable honors include: