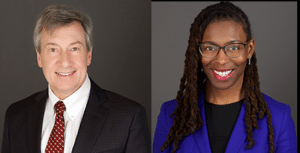 The owners of Plaza at 835 West Hamilton Street brought an eminent domain proceeding against the City of Allentown, arguing that the City caused them to lose a major tenant and default on their mortgage. As a consequence, the building owner claimed that they suffered a “taking” of their property for which they sought “just compensation.” The City, represented by Litigation Shareholders Douglas J. Smillie and Maraleen D. Shields, argued that the City was not responsible for any harm which have befallen the building owner, as the City did not enact or implement the law which provided the incentives (the “NIZ Act”), nor did the City take any actions which harmed the economic interests of the building owner.

The Court initially acknowledged that the building owners had not identified any specific acts by the City to support their taking claim. Nevertheless, the Court permitted the case to proceed, allowing broad discovery in an abundance of caution and in the interests of transparency. After the completion of discovery, the City filed a motion for summary judgment, seeking the dismissal of the case. Upon consideration of the motion, the Court agreed with the City’s position. Noting that the Court had given the building owners extremely wide latitude to conduct discovery, the Court concluded that the building owners were still unable able to produce any evidence demonstrating that the City had taken, or had failed to take, any actions resulting in harm to the economic interests of the building owner, and dismissed the case with prejudice. Mr. Smillie argued the summary judgment motion on behalf of the City.

For a full report on the case, click here.

FLB’s Litigation & Trial attorneys have a wealth of experience arguing cases in front of courts and juries on behalf of their clients. Please contact one of our attorneys for additional information or assistance.