A decade ago, two brothers from a family deeply rooted in Pittsburgh major league baseball and hockey teams found themselves in the Lehigh Valley.  Jim and Rob Brooks, both with business backgrounds and as owners of an ECHL professional franchise in Wheeling, West Virginia, were presented with an opportunity to purchase the Philadelphia Phantoms, the AHL top minor league affiliate of the NHL’s Philadelphia Flyers.

The Brooks Sports Group, headed by Jim and Rob, engaged prominent consulting firms to conduct a national search for an optimal market to locate the Phantoms. Their analysis? The Lehigh Valley would provide a successful home for a professional hockey team – especially with a parent organization based in Philadelphia. It all depended on whether a major league, modern arena could be developed. Rob and Jim Brooks called on Joe Fitzpatrick and FLB to assist. 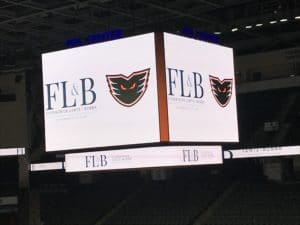 FLB and the Phantoms Celebrate a 10-year partnership

FLB helped Jim and Rob solve the ever-changing, broad spectrum of issues presented by team relocation, contracts, governmental interaction, and working with the City and developers to bring the downtown arena and world-class events center to reality.

Ten years later, that relationship continues to grow.  FLB, Brooks Sports Group and the Phantoms are flourishing together.  Jim Brooks recently stated, “We’ve had a lot of legal needs from all different gamuts, as you can imagine, and with each one Fitzpatrick Lentz & Bubba has been there for us and followed through in the right way to get the job done.” 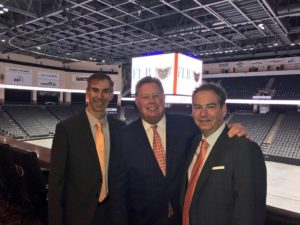 Besides the hockey team, the Brooks brothers oversaw the founding of Phantoms Charities, a not-for-profit  organization. Phantoms Charities helps Lehigh Valley children in the the community, at home, and in their schools, providing sports programs and equipment, retrofitting homes for the handicapped, and working directly in sports education. Joe Fitzpatrick was asked to serve as a Founding Director and several FLB employees are active volunteers for Phantoms Charities in the community.

Whether working on special events, protecting trademarks, branding or marketing interests, assisting with employment matters, dealing with governmental agencies, or just providing solid business advice, FLB is pleased to be on the Brooks Group and Phantoms team.  To hear Jim and Rob’s thoughts on their relationship with FLB, please watch this recent video:

FLB, Jim and Rob Brooks, and the Phantoms look forward to the next decade, working together with tremendous sports, events, and community benefits in the mix.