Fitzpatrick Lentz & Bubba was recently honored by Habitat for Humanity of the Lehigh Valley with the Linny and Beall Fowler Community Award. The Linny and Beall Fowler Community Award was established in 2011 to recognize organizations who have demonstrated the true meaning of partnership with Habitat Lehigh Valley. FLB is proud of its support of Habitat Lehigh Valley, which has spanned decades. From fundraising efforts to volunteer services, our employees have always had a special place in their hearts for the work of this key community organization.

“FLB was a clear choice for the award because they’ve truly been involved with every aspect of Habitat, from builds to board service to event participation, and everything in between”, said Jessie Shappell, Director of Marketing & Development. “FLB’s support always goes above and beyond. As a recent example, the 2019 FLB She Nailed It! team raised a record-breaking amount of donations, drastically surpassing the $1,500 fundraising fee and raising over $6,000 for Habitat, largely through grassroots fundraising and individual donations. FLB’s support is evident throughout the entire firm, and that, to Habitat, is the true meaning of partnership.” 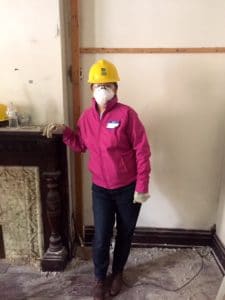 Jane P. Long is in her second term on the Board and currently chairs its Governance and Nomination Committee.  Other FLB employees who have previously served on Habitat’s Board include Shareholder Joshua A. Gildea and Hazel Hilliard.

Habitat was also a beneficiary of FLB’s “30 Acts of Giving Campaign” in 2018, which celebrated the Firm’s 30th anniversary. Firm employees collected and assembled ten “Welcome Home” buckets, each with ten necessary but often overlooked household items to be delivered to families as they moved into their newly built homes throughout 2019.  Some of these items were light bulbs, Pine-Sol, dish scrubbers, and an LED candle
for a sprig of holiday cheer.

Fitzpatrick Lentz & Bubba would like to thank Habitat for Humanity of the Lehigh Valley for their recognition with the Linny and Beall Fowler Community Award. We would also like to thank the members of our team who make such an effort to support this organization. We hope to continue this hard work to give back to the community with affordable housing options for years to come.